It’s Spring and things have been really, really busy.
In between planting and transplanting and putting even more plants under the grow lights, we decided to get an incubator and hatch out baby chicks from our own chickens.  Here’s the incubator with the eggs on “lockdown” — three days before they are expected to hatch when the temperature is to remain constant, but the humidity levels rise up to 80% so that the chicks can break through the membrane around each egg.

While the incubator was holding the hatching eggs, we set up the brooder in the Workshop.  That eerie red glow is from the heat lamp which ensures that the baby chicks are warm enough in their new home.  Although the heat lamp is on 24/7, the glow is only visible at night.  It looks spooky, but to chicken-keepers, it’s reassurance that the chicks will be warm, dry and not pecking at each other.

Hatching is supposed to happen over 24 hours, but in our case, it was a “draggy hatch” that took more like 48 hours.  Here are our first four hatchings, resting under the heat lamp in the brooder.

Almost 12 hours later, we had 16 chicks in the brooder under the heat lamp.  It turns out that Londo, our rooster, is a Blue Ameraucana, rather than a Black which means he has one black feather color gene and one white feather color gene.  We expected mostly black chicks (since we didn’t realize Londo had any white genes), but we’ve been pleasantly surprised to have black chicks, yellow chicks, one grey chick and two striped chicks.

Here is a close-up of one of the White Leghorn/Blue Ameraucana crosses.  We’re waiting until the wing tip feathers grow out to determine each chick’s gender.  The pullets (girls) will stay here and lay eggs, while the boys will go to a friend’s farm to be raised for meat.
The quality of the photos varies as I was learning how to take chick photos AND how to deal with the red of the heat lamp.  Lots of learning curves! 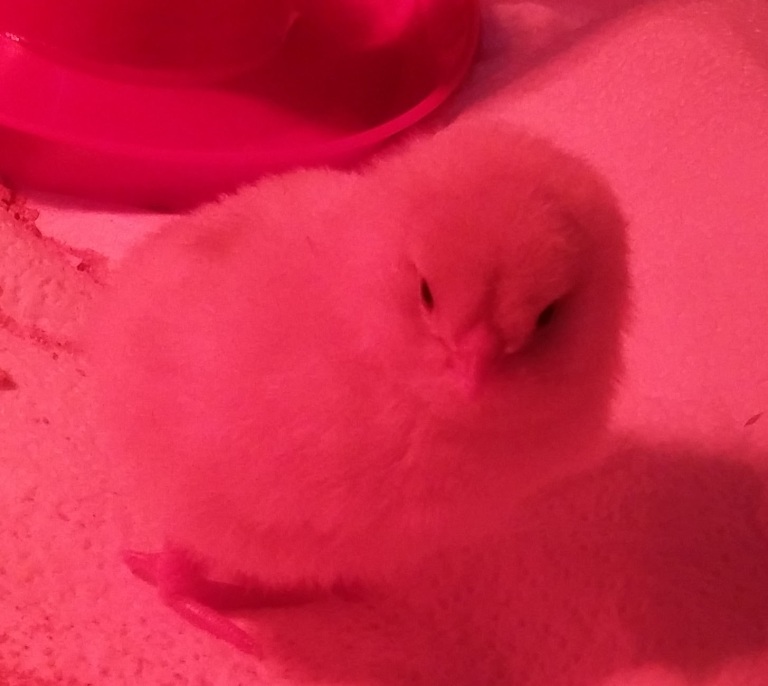 The chicks don’t need to eat or drink for the first 24 hours as they still have the yolk sac in their abodmens to give them nourishment  However, it’s best to give them food and drink as soon as possible so that they know how to eat and drink when the yolk sac is used up and they need those nutrients.  The transition from embryo that already has plenty of food to chick who eats and drinks is a big one and I was very relieved to see the little chicks drinking on their own.

Here is yesterday’s photo of all 23 chicks (from 31 eggs).  To keep the chicks from filling up on items that aren’t food, for the first 2 days, one covers the bedding with cloth and paper towels so that they have something with traction to walk on, but don’t eat the bedding.  This morning, they were all eating from the trough and drinking from the waterer, so I took up the toweling and they are now walking on pine shavings.

Holding young chicks makes them more friendly as adults — email me if you’d like to come over and hold a cute baby chick!
I’ll be cleaning the brooder at least once a day and maybe twice — baby chicks are really cute, but gosh, they are also little pooping machines!   We’ll be composting their poop and adding it to our fallow field that could really use the nutrient boost.
Having baby chicks is really fun, but as a plant person, I had to finish off​ with this photo of our Pearl Bush.  With all the freezes and thaws of this Spring, I was sure that the blossoms would freeze and fall off as our magnolia and azalea bushes did earlier in April.  But the Pearl Bush prevailed and gave us this lovely display (which is dissapating with all the rain) which is all the more precious for having lost our other Spring displays. 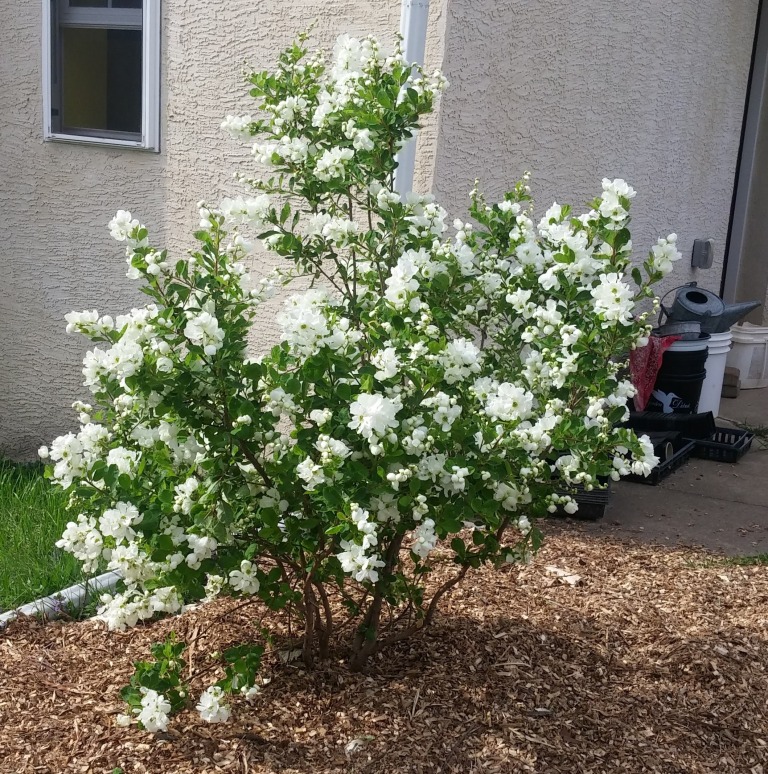 Spring is here!  We do have asparagus, although the season is starting slowly with this wet and cold weather.   But it’s warm and dry in the Workshop if you’d like to stop by and hold a baby chick!