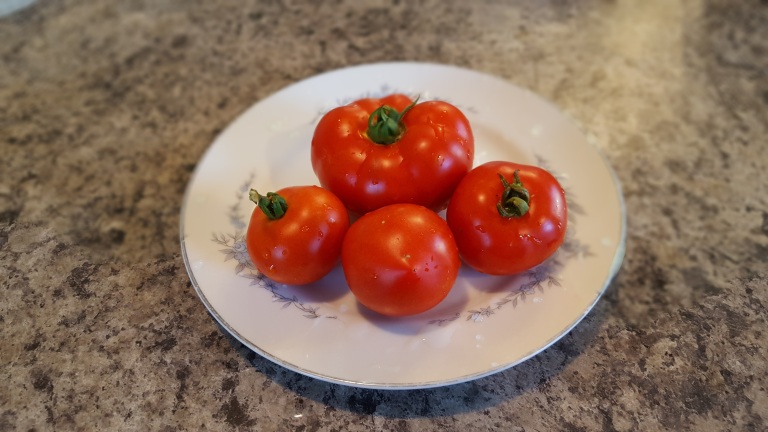 Andrey Baranoviski (of Minsk, Belarus) has sent out several different tomato varieties to North America.  They all have ‘Minsk’ in the title.  The tomato profiled here is only known by the names above.

Determinate:  Heirloom tomatoes are rarely determinate.  This one is.  Be prepared.

These tomato vines take off when put in the ground, but once they are about 4 feet long, they put all their production into producing tomatoes. 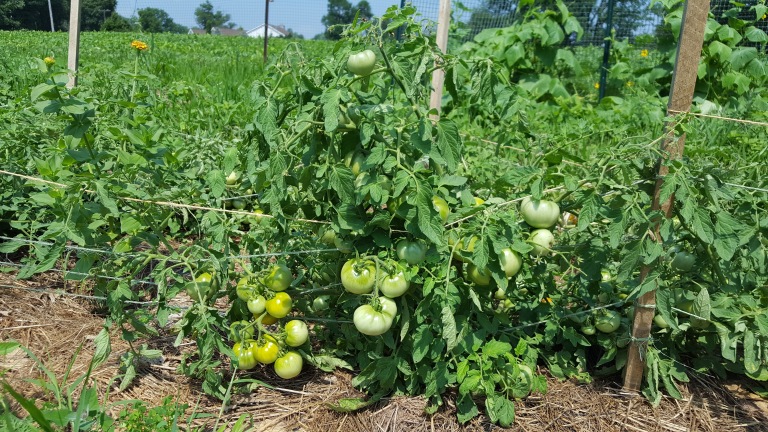 As the photo shows, we staked and Florida Weaved our plants because we didn’t realize how short they would be.  We’re not a fan of cages for market production, but if you have tomato cages, use them for this variety.  Fruit set tends to concentrate at the base of the plant, so some support is necessary for marketable tomatoes.

The plants will produce flowers within the first month and continue to produce them until the second week of August.  By the end of August, these plants are done and can be ripped out to make way for a different fall crop.

Normally, you’d want a longer production window for tomatoes, but ‘Early Minsk’ produce so early (our first tomato was July 9 on field grown plants during a cool, wet Spring) and taste well enough that everyone is happy to eat them until the late-season heirloom beefsteaks come in.

The Drawbacks:  Early Minsk is early, early, early and tastes like a real tomato and produces plenty of them.  What more does a tomato grower want?

Well, disease resistance would be nice – and something this variety appears to be lacking.

Granted, 2017 was a cold, wet Spring, but this tomato seemed to get every disease it could in the short time it was in the field.  By the time its determinate schedule had said that there would be no more flowers, the vines were done.  Production, of course, slides down as the plants succumb to disease, but other varieties are usually ramping up at this time and there is so much production early on that it’s worth planting.

Sunscald, as the plants wither from disease, is also a problem.  Although this tomato will keep producing through mid-August, plan on having other varieties take up the slack in mid to late August. 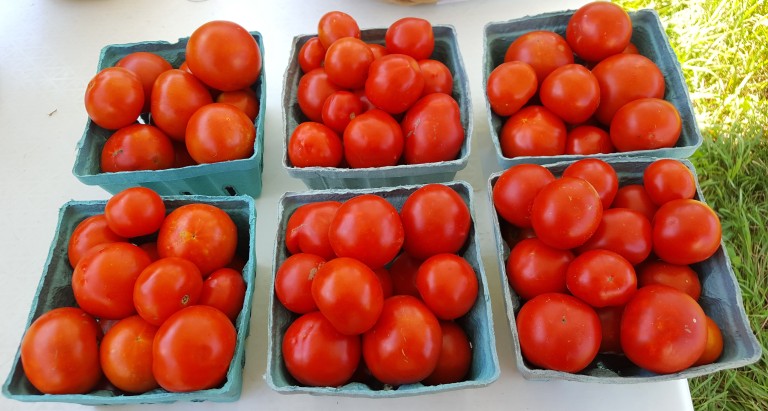 The Size:  As the photos show, this is not a large tomato.  We sold them in quarts to individuals and by the pound to restaurants.  They are excellent in sandwiches, but it takes several slices, which is usually a whole tomato.

Most of the varieties have ‘Minsk’ in their name, so when ordering these tomatoes, be sure to have the full name so that you get the tomato that you wanted.

Experimental Farm Network (EFN) received seed from USDA GRIN and was impressed with its earliness and flavor when grown in the Mid-Atlantic, so began promoting the variety.

While Barnaoviski still offers the seed through Seed Savers Exchange, it’s now possible to purchase the seed from North American growers by googling one of the four names used at the top of this blog post.

In 2017, we had our first tomato from field-grown plants on July 9.  For 2018, we will be growing these tomatoes in our new high tunnel with a goal of producing marketable quantities for July 4th.  I agree with EFN that this tomato shows great promise for Mid-Atlantic commercial and home production for those that want a worthwhile-tasting tomato as early as possible.