In her later years, Frank’s mother grew gooseberries.  She wasn’t so sure that she liked them, so she’d pass them along to us and I’d make pies and fruit crisps from them.

Once we came to the farm, I had space to grow small fruits.  At a 2013 perennial plant swap, someone brought two ‘Pixwell’ gooseberry plants.  No one else wanted them, so I managed to score both of them when my numbers came up.

‘Pixwell” is the traditional American variety used in the unripe state to make pies and jam.  It looks like this on the plant:

Contrary to what most of the plant sale sites say, ‘Pixwell” has some NASTY thorns.  Harvesting from any gooseberry plant is a careful business.

“Pixwell’ may be the old standard, but it has not held up well in the small fruit press.  The variety is almost universally panned as “overly sour” and “tasteless” by garden writers.  Lee Reich, the upstate New York fruit expert (if you like fruit and he’s speaking, you want to attend his lectures!) outlines how to grow gooseberries here and like most fruit folks, vastly prefers the newer-to-the-US Finnish and Ukrainian varieties which are mildew-resistant (the biggest disease problem in gooseberries) and sweet enough to eat out of hand when ripe in late June.

The trend is to use the American varieties (like ‘Pixwell’) unripe for pies and jam and to let the European varieties ripen to eat fresh as “dessert gooseberries.”

All fine and good, but how “ripe” should an “unripe’ gooseberry be to make pies?

We have 4 American gooseberry bushes.  Since Memorial Day, I was getting a steady stream of emails, asking to buy our gooseberries.

Unfortunately, my mother-in-law is no longer with us, so I couldn’t ask her when she had harvested her gooseberries.  It’s considered bad form to experiement on your customers.  So, to answer the question “When is an unripe gooseberry ripe enough for pie?” I would have to make an actual gooseberry pie.

Sometimes farm work is so tough!

So, I went out and harvested the Pixwells.  They looked like this:

Gooseberries must be “topped and tailed” before they are cooked.  It’s time consuming to take the stem off the top end and the blossom-end “tail” which is another reason why some people just don’t want to bother with them.  As you can see from the photo, these gooseberries are in their light green “unripe” state.  ‘Pixwell’ gooseberries will turn light pink when ripe; other varieties will turn pink, purple or yellow, depending on the type.

Next, I needed a good pie recipe.

The currently popular gooseberry varities may be from Nordic and Eastern Europe, but the pies and jams made in the US are usually from British recipes.  When I need a traditional English recipe, I check out the BBC, which once again, did not disappoint.  Their gooseberry pie recipe is here.  What was fun about the BBC’s recipe is that it took port. However, I needed a little more instruction.  The Beekmans saved me with a great recipe here.

Both the BBC and the Beekmans agreed that gooseberries should be cooked before putting in the pie shell.  The filling ingredients are put in a saucepan and simmered until the goosberries “pop” which really does happen in under 10 minutes as shown in this photo: 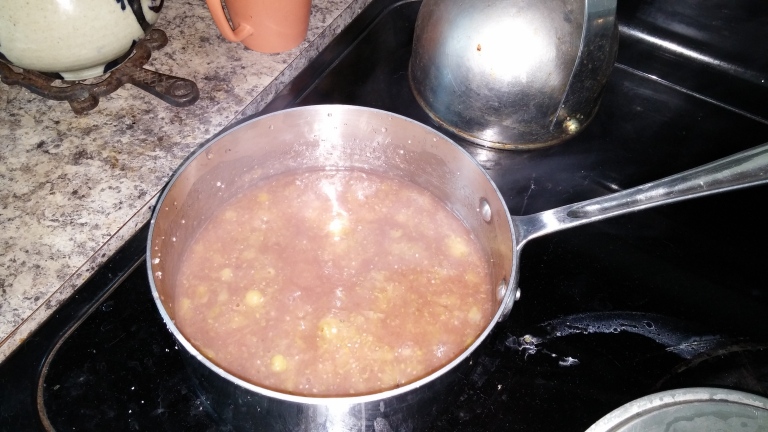 While the filling cools, one pre-bakes the pie’s bottom crust.  Once the bottom crust and the filling are cool, one pours the filling into the bottom pie crust, then puts rounds (Beekmans) or strips (other recipes) of pie crust on top of the filling.  One then bakes the pie with a cookie sheet under it to catch drips (which will happen even with lots of space between the pie crust rounds or strips to let the steam out.  This is one goopy filling!
If one is the Beekmans, one’s pie looks perfect regardless (the advantange of staff!).  If one is me, who is a grower, rather than a baker, one’s pie looks a bit gloppy.  But to show you that everyone here really liked it, here’s a half-finished plate:

So, how ripe should an unripe gooseberry be for pie?  Personally, I love tart flavors, so I thought the pie was great.  But Cornell Univeristy’s write-up on gooseberries here suggests mid-June for making pies.  I think another 10 days on the plant will benefit the gooseberry flavor.

So, if you’d like to buy gooseberries for pies or jams, contact me June 18!  They should be perfect then!